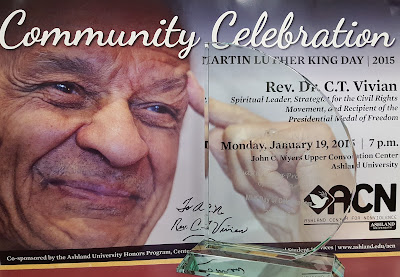 In case you missed it, watch C.T. Vivian's address on YouTube.

For Martin Luther King Day 2015, the Ashland Center for Nonviolence bridged the AU campus and the wider community through an event featuring the civil rights legend, C.T. Vivian. At 91 years old, Dr. Vivian addressed a crowd of 650 attendees in Upper Convo, discussing his personal friendship with Martin Luther King, as well as his impressive involvement in pioneering activities for desegregation and civil rights such as the famous 1965 march from Selma, Alabama to Montgomery.

The event was clearly an historic one for Ashland University. It also brought together a lot of different groups: it was well-attended by members of the Ashland County and Richland County communities, including school children who were receiving awards from art and essay contests that ACN had been running; the AU Honors program and Diversity Scholars program were in attendance, some of whom took part in a meal with Dr. Vivian before the main event (at the meal, Vivian was interviewed by Dr. Peter Slade of the Department of Religion). Many students and others stayed after the event to be photographed with Dr. Vivian.

Dr. Vivian was introduced by AU interim president, Dr. William Crothers, who, along with the interim provost, and various AU deans and vice presidents, took part in the pre-talk meal. This was a terrific time for a select number of students and members of the wider Ashland community to greet AU administrators and faculty members within a the generative context of focusing on important matters of equality, human rights, justice, and nonviolence.

Just as impressive were the events that followed on from Dr. Vivian’s visit. The film Selma was released around this time (a film in which Dr. Vivian features as a character played by an actor). ACN, Diversity, and Religious Life sponsored a group of about 30 students to view the film a week after Dr. Vivian’s visit to campus—this led to a surprisingly meaningful discussion about how students of various races (including international students) experience race on the AU campus. Moreover, Dr. Vivian’s talk sparked a lot of informal discussions (in and out of classrooms) especially concerning some uncomfortable aspects of race relations in the United States, including discussions about police brutality and the Black Lives Matter movement.

It is a rare thing for a single campus event to have had such a wide-ranging impact. Many thanks and congratulations to everyone who made this extraordinary event possible.