Global Warming: Can It be Stopped? 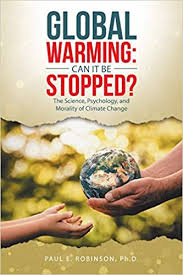 Concerned about the Earth your children and grandchildren will inherit?  I am, so I have written a book about global warming/climate change hoping to inform and encourage action.  The book, Global Warming: Can It Be Stopped, subtitled, The Science, Psychology, and Morality of Climate Change, is available from the publisher, Archway, or from Amazon, Barnes and Noble, or wherever books are sold.

The basic premise of the book is that climate change is as much a human behavior issue as it is a scientific, factual one.  Facts are useless unless the mind is willing to accept them.  In this book the scientific facts are presented in an easy to read Q&A format.  The facts are examined in the context of the war against climate science.  It will become clear to the reader that the science about the anthropogenic (human) cause of global warming is settled.  There is no doubt among the overwhelming vast majority of scientists that humans are unequivocally responsible for the unparalleled rate of global warming we are witnessing.  An important distinction is also made between beliefs and facts.

The reader is challenged to think about the psychological, religious, and spiritual aspects of the issue.  The reasons people reject the facts of global warming are detailed.  The psychological mechanisms for doing so are explained.  The hope is that people will develop better insight about how they and others treat the facts of global warming. In addition, the 4.2 billion children of Abraham are challenged to get informed and involved in saving our planet for future generations.  It is argued that it is their moral duty to do so.

The book encourages love of our lonely little planet and all its inhabitants by stressing that we should not take Earth’s blessings for granted.  The reader is challenged to make “sacrifices” in order to prevent further damage to our environmental system.  Principles to guide a discussion of the issue with family and friends are offered. Steps we all can take to reduce our carbon footprint are listed. Questions for further thought and discussion are included at the end of each chapter.

A strong case is made that we must act now. It is not only in the interest of future generations that we do so, but our own as well.  The book has been described as a passionate and rationally persuasive plea to reduce our carbon emissions.  If we can accomplish that, we can reduce global warming and preserve the benefits we all have enjoyed from our Mother Earth for future generations.

Paul Robinson is Professor Emeritus at North Central State College where he taught for 22 years.  He has been a practicing psychologist for over 50 years.  He is one of the early members of the ACN where he served on the Steering Committee.  As the father of two sons and the grandfather of four grandchildren, he is deeply concerned about the Earth we are leaving our children and grandchildren.  Paul feels a moral responsibility to speak out about the state of our planet and the health and wellbeing of future generations.

Posted by Ashland Center for Nonviolence at 12/09/2020 No comments: