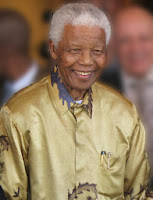 
The death of Nelson Mandela this week took me back to an evening in 2004 during the tenth anniversary year of South African independence when I first truly understood the significance of Mandela and his impact on history. Like many North Americans, I had followed for several decades the struggle against South Africa’s racist system of apartheid. I had even joined a few anti-apartheid protests during the 1980s and thrilled to the Special AKA’s runaway ska dance hit, “Free Nelson Mandela.” And now, here I was, in South Africa myself for a year of teaching, and I was getting to know a young white Afrikaans English professor in the English department at Stellenbosch University near Cape Town.

We were comparing notes in that way that people do when they first meet one another and see the potential for a deeper professional friendship. Both of us named Daniel, both of us growing up within racist systems some 8,000 miles apart—he in South Africa under Apartheid and I during the 1950s in then-segregationist Virginia. Both of us recalled being trapped by the privilege of our skin color in a system with which we deeply disagreed. Both had worked in our own small ways for its eradication.