The Ashland Center for Nonviolence is presenting proposed changes to their By-Laws for public review and comment. Please feel free to leave comments on this page or send an email to ebuttil@ashland.edu with any concerns. The proposed changes are in relation to the makeup of the Steering Committee.

A Steering Committee shall guide the organization.

The Steering Committee shall consist of twelve Ashland Center for Nonviolence members plus the Executive Director, who shall have no vote.

The Steering Committee shall be elected by the membership as terms expire.

The Steering Committee shall be a diverse group of energetic people committed to understanding and promoting alternatives to violence.

At least four members of the committee shall be current full-time students or full-time employees of Ashland University.

At least four members of the committee shall not be current full-time students or full-time employees of Ashland University.

No other requirements of age, gender, status, or profession exist.

Members of the Steering Committee shall serve for three years; terms may be renewed.

Members who have served two consecutive terms shall wait at least one year before being elected to another term.

If a member leaves the committee before the member’s term has expired, the committee shall name a replacement to serve out the remainder of the term. (This is to keep the terms of the steering committee staggered, 1/3 coming up each year.)

Posted by Ashland Center for Nonviolence at 2/24/2021 No comments: 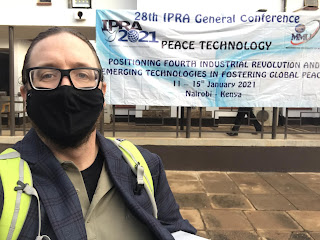 I left the United States for Kenya in the wake of the violence of January 6th. On January 8th I was on my way to the International Peace Research Association’s (IPRA) conference in Nairobi. The journey from driveway to hotel was about 33 hours, and it was a strange experience at every level—transitioning from functional self-isolation to international travel is quite surreal.

My trip almost hit a roadblock. With cases of COVID-19 spiking, getting a PCR test within 72 hours of arrival into Amsterdam (where I’d have a layover) was difficult. I found a single location in the whole state of Ohio that said they “might” be able to get my results in time for a trip. It was a whirlwind.

I was the only attendee who was able to make the trip from the US. The other North American representative made the trip from Mexico; however, there were several hundred people who were able to attend and present virtually—appropriate (I think) for a conference discussing the role of technology in peace. It was a reminder that there is not always consensus on approaches and strategies within the peace research community. While I took extensive measures to make sure I did not spread the virus in any direction I traveled, there were a number of people who condemned and/or challenged the ethics of such a conference and/or my participation.

When I arrived, I shared with colleagues from Kenya and other African states who were frustrated that former settlers are still trying to make decisions “for us” instead of “letting us make decisions for ourselves.” There is a long history of violence in Kenya, and the West has been complicit in much of it. Like America, Kenya also has markers of its violent story. The measures taken to combat terrorism and violence or to insure the peaceful transition of power - things Americans are thinking hard about today - are essential to many Kenyans’ lives.

I entertained a friendly debate with the position of memorializing violence; perhaps they should have left the broken glass on the floor of the U.S. Capitol as a reminder of the fragility of the American democracy. My colleagues were adamant: “you must be the beacon of democratic freedom.” Everyone knows the imperfections of democracy, but it is the aspirational goal for so many. Democratic problem-solving is the best protection against uncivil wars and coercive violence.

Power structures underlie so much of the decision-making we face - often presenting in violent ways. I remember picking up a local newspaper; the headline read “Trump puts Africans on night flight to Nairobi,” and the subhead read “some deportees had open legal cases.” Borders and struggles with migration and travel are timeless. I talked with my colleagues about the exhaustion that four years of resistance and nonviolent struggle in America have caused. President Trump had only been in office for a handful of days when I took my signs to the international airport to oppose the Muslim travel ban.

Ultimately, the point of our work is to conduct systematic analysis on the empirical data. Where did our nonviolent struggles succeed, and where can we revisit the strategies to do better? Going to conferences, especially IPRA, helps me to recharge my batteries. Meeting in Sierra Leone, India, and Kenya has helped me to connect with the global struggles in very literal ways. But, more importantly, I have the chances to celebrate our successes in building durable peace in the midst of, and despite, widespread human suffering. Every day, nonviolence is working all around the globe to tremendous success, what a great reminder.

Wim Laven, Ph.D, an instructor of peace studies, political science, and conflict resolution, does research on forgiveness and reconciliation. He serves on the executive boards of the International Peace Research Association and its North American affiliate the Peace and Justice Studies Association. He is also a member of the ACN Steering Committee. Wim is a writer with numerous pieces syndicated by Peace Voice and he also works on the editorial team for the Peace Chronicle magazine. His experiences in the field range from mediating disputes in small claims court to interventions during complex humanitarian disasters.

Posted by Ashland Center for Nonviolence at 2/11/2021 No comments: