Repentance, All the Way Down: A Columbus Day Meditation 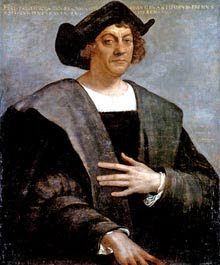 One of the questions which a day like Columbus Day presents is not whether or not Columbus should be celebrated, but what should be done instead of celebration. Columbus’ diaries and the historical record speak abundantly to the reasons for not celebrating Columbus, but should we perhaps celebrate another exemplar? Should we, as Seattle has recently done, reform the day into Indigenous People’s Day?  Or should there be perhaps another exemplar celebrated, such as Bartolome de las Casas?

In looking at this day from the perspective of nonviolence, there seems to be no easy answer, and certainly no perfect exemplar. Columbus, as the historical record attests, engaged in slavery, forced labor, and dismemberment of the indigenous people. The indigenous people were no pacifists, engaging in skirmishes with their neighbors. De las Casas, while famously advocating against the Spanish enslavement of the indigenous people, initially proposed that the Spanish enslave Africans instead of the North American natives. Any alternate celebration, while moving away from Columbus, only appears to celebrate violence again in a different form.

Domestic Violence Awareness Month: What Can We Do?

October is Domestic Violence Awareness Month and this year, it arrives on the heels of the highly publicized case of former Baltimore Ravens’ running back Ray Rice, who was indefinitely suspended from the NFL after video exposed his physically violent attack against Janay Palmer in an elevator (see a timeline of the events of the case here). With regard to the NFL, the conversation about domestic violence and the league’s poor handling of the Rice case continues. The Seattle Seahawks’ quarterback Russell Wilson, for instance, has penned a call to recognize the need for NFL players to handle aggression productively, and for fans to donate to the National Domestic Violence Hotline. Meanwhile, cultural workers like comedian Megan MacKay have produced work not only to entertain, but also to provoke audiences to discuss recurring narratives of survivor-blaming and lack of adequate accountability for abusers.In the midst of the broader public controversy, it might be easy to lose sight of two critical questions: how does domestic violence affect me? What can I do about it?


If you asked for my opinion, I’d have to tell you that I would prefer to walk a mile on hot Legos before I’d ever choose to run a marathon. But others aren’t so wary of long distances. In 1992, massive groups of indigenous and Native Americans began to run.

In Native American culture, an Eagle represents the spirit of the northern continents, while a condor represents the south. The year of 1990 began talk of an ancient tradition of bringing the eagle and the condor together to celebrate resources and community. Two short years later, the Peace and Dignity Journey began for these people. Natives from the northernmost tip of Alaska to the southern islands of Chile began their spiritual journeys towards Central America, bearing prayer staffs of every community. Vanessa Inaru Pastrano, a native Taino woman and the director for the Taino community’s Journey, explained that it was a culmination of prophecy: that “native nations will come together again.”
Read more »
Posted by Ashland Center for Nonviolence at 10/01/2014 No comments: