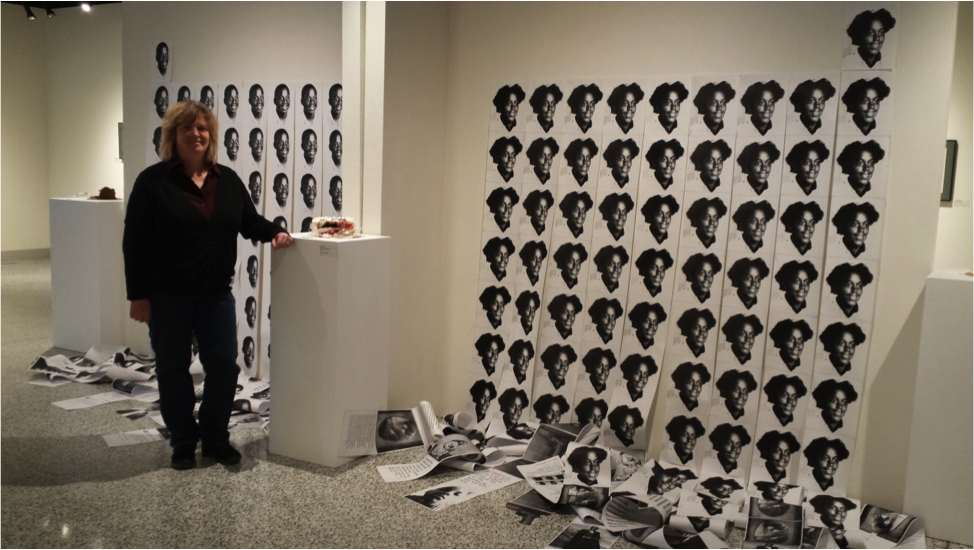 During the month of February, Ashland University’s Center for the Arts hosted a faculty art show in the Coburn Gallery. Dr. Cynthia Petry, the director of the art gallery, created a piece for show entitled “Whiteness and Blackness.” Centered in the gallery, the piece seemed large but simple at first glance. After an up-close look and a discussion with Petry, however, it was clear the piece had a life all its own. In the light of the recent Black History month, MLK Day, Selma, etc., the piece stood out as a bold statement, not simply on the colors of black and white as art, but on the contrast of Blacks and Whites in America. She portrayed in the piece both contemporary situations and those dating back to pre-abolition.

The piece reflected modern racism in a way that throws you back into history and reveals an incredible parallel between the civil rights movement and the racially motivated crime and discrimination of today. “Whiteness and Blackness” included pictures and printouts of news articles and social media posts sewn together and hung from repeated printout portraits of two black adolescents, a male and a female, with whom the artist attended school. She then explained that the girl photographed in the project was one whom she considered her best friend, but lamented that they were only able to be "school friends," as races did not mix at all in the south. She says that she was taught from a very young age what was appropriate and what was not--being friends with a young black girl was not.

The pictures descending from these portraits showed racism at its “finest,” displayed for the world on the internet. One printout was a list of rules made by a parent whose son was racially mixed. The rules set strict guidelines for the son, simply to lay back and remain safe in the light of America's current race issues. Another published tweet portrays a father’s rage that his son had been racially profiled as a criminal. Each post, each picture, each statement is a testimony to the eternalizing of racism in American culture.

Diverging from the pictures, about the piece, three cakes along with tagged serving utensils were placed. The first, to the left if the piece, was white cake with white frosting and red lettering that read, "White Privilege." The second, standing in the center, was a chocolate and vanilla swirl cake which read, "Whiteness and Blackness," the title of the composition as a whole. The final cake, all chocolate with chocolate frosting, to the right of the piece, read, "Racism is Corrupt." Further, on the serving utensils were tags. She had dug into the past and pulled forward her family's slave records, copying and including them with each cake. “It was a social experiment,” she explained. She wanted someone else to make the cakes (she ordered the cakes from a local bakery) in order for the community to get involved. The baker immediately asked if she was a teacher. Each cake represents a different element of what a culture with mixed races—America—could be. Each of the singularly colored cakes showed the truths of racism in society while the swirl cake showed her true message. At the opening of the show, her daughter was also in attendance with her. She reflected on her daughter's reaction to being offered (white privilege) cake: "I don't want to be judged."

From holding slaves to refusing to eat cake labeled as being part of a culture of white supremacy, her southern family has shifted along with America, but this was not her point. Yes, the piece exposed racism in modern culture and showed that race does exist, but the point is that racism shouldn’t. Reflecting on C.T. Vivian and the reactions to him in the community, she said, “Vivian wasn’t clear-cut. You have to understand the history behind it. People don’t think it’s true anymore”—racism, that is. She explained that our races make us different in a good way, but “it’s not just black and white, it’s humanity.” Petry calls us all, not to be colorblind, but to recognize the positive qualities of different races.