“We’re Taking Back the Rainbow!” 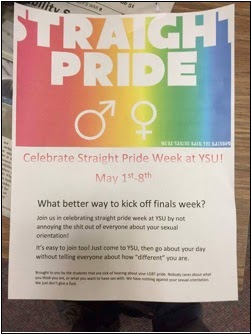 Now, I know that I’ve mentioned in previous blogs, specifically those of #TheSelmaProject, that I’m from the Youngstown area, which just so happens to be ridden with crime and inequality. This is not to say that everyone from Youngstown falls into this category of anti-activism, but it’s come to my attention that some crazy things have been going on back in my hometown.

Youngstown State University is big on diversity—it is in Youngstown, Ohio—and for the most part, people are okay with that. Youngstown city and YSU are full of wonderful, accepting people…but there are always those who fight progress for the traditional, for the safe, non-progressive “values” that seem to always end up being on the wrong side of history. Must we revisit the Civil Rights Movement? Yes—because we’re still in it.
Ohio remains at the present day to be one of only 13 states to still ban gay marriage. Is it right or wrong based on Christianity or natural law or whatever moral values you have? I don’t know. I also don’t think it makes that much of a difference. What is the law if it is governing the people rather than being governed by the people? However, regardless of Ohio laws on marriage, people here are still allowed to identify under LGBTQ sexualities, romanticisms, etc. Would it not be wrong to ban even that freedom which is given to them in the Bill of Rights? In Youngstown, home sweet home, an anonymous group is trying to do just that.

I’m speaking for myself, not for the ACN as a whole, when I say that for reasons I’ve already stated as well as infinite others, I as a cis/white/straight/middle-class young adult have no opposition to the marriage rights of whoever wants to do so. I am speaking for the ACN however when I state that equality is important. We strive for diversity and acceptance and a future where everyone has a voice no matter their identity. To have that voice stifled is against our values as a nonviolent and non-oppressive organization. This anonymous group at Youngstown State has printed and put up posters in support of a week of “Straight Pride.” On the grounds that they too have a voice, I’m not one to infringe on anyone’s Constitutional rights; these rights, however, go only so far as they do not infringe on someone else’s rights—which is exactly what this group is trying to do. I therefore find it acceptable under the circumstances to speak out against said oppressive voice. It is entirely baffling to me that anyone would go to these lengths to suppress someone’s right to be “different.”

Official statements released say that this was not sanctioned by the school itself. Statements like this, however, have been flooding YSU’s Yik Yak as well, cultivating anti-LGBTQ views and the fear and anger that go with them. They’ve even made the Huffington Post. The concept to take away from this incident is simply that we as a community, as Ohioans, as Americans living in the so-called “land of the free” need to move forward. Progress is here and acceptance has to come with it.

Official statement by YSUnity about the recent ‘Straight Pride’ signs:


Due to the recent posting of a Straight Pride flyer at YSU, YSUnity is releasing the following statement regarding the incident:

As an organization, YSUnity supports everyone on this campus, whether they are LGBTQIA, allies, or not. We firmly believe this campus should be a safe place for everyone to be themselves. YSUnity does not support any kind of hate against our community or any other community operating on this campus. We hope this situation will draw attention to the need for further inclusivity and education about diversity at YSU.


Emily Wirtz is a student intern with the Ashland Center for Nonviolence.