What's It All About? 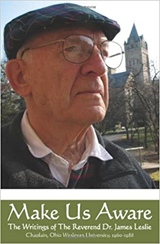 When I need inspiration to handle a world that seems to be spinning out of control, my “go to” book is “Make Us Aware: The Writings by Dr. James Leslie”.  Dr. Leslie was chaplain of Ohio Wesleyan University from 1960-1988, very tumultuous times, indeed. The “James Leslie Center for Peace and Justice” was established in 2007 at OWU and this book was lovingly published by his colleagues in 2010. As I participated last week in the OWU Alumni Book Club to discuss it, I was moved by the long-lasting, profound impact he has had on his students and am absolutely convinced that his legacy will live on in perpetuity. I’d like to share a piece “What’s It All About?”.

Full disclosure, I’m not an alum of OWU. However, to tell my journey with the nonviolence movement and the importance of activism means to start with my earliest years growing up in Delaware, Ohio, participating in programs sponsored by this chaplain’s office. He was my best friend’s father and a major influence in my life until his death. My eyes were opened to social justice, racial reconciliation, and world peace. During those turbulent times of the 1960’s, Dr. Leslie provided opportunities to process and protest the deaths of John Kennedy, Bobby Kennedy, Martin Luther King, the Vietnam War, the very first seeds of what we call today “Black Lives Matter”, to name a few. As a 14-yr old boy, he sat in Mahatma Gandhi’s hut and listened while Gandhi and his father discussed matters of faith and world affairs. He and MLK were awarded their doctoral degrees from Boston University on the same day.  Dr. Leslie’s orientation to the world was something I never would have experienced had he not organized thoughtful and peaceful vigils, speakers, protests, sit-ins, and marches. He taught me to view the world through a non-violent/civil rights lens. To realize that silence and inaction often translate to acceptance and agreement. That to not participate in the process for the change you want to see means you will forever live with the results of a world much different than it should be. To speak truth to power.

And, now, his words, originally heard at an Alumni Convocation in June 1974. .  I hope you will agree with me that these words are as relevant and inspirational today as they were then.

What's It All About?

What is it all about? It's about people. in a certain Midwestern college, in a county seat, coming together to renew friendships and memories, mostly pleasurable, but some sad.

It's about remembering traditions, of gathering in this place with these people, to keep in touch with each other and the world that surrounds us and sometimes engulfs us.

It’s about taking time to remember who created us and to try once again to discover why.

It’s about lowering our defenses for sixty minutes to confront one another and God.

It's about a world that is hurting right now more than we can comprehend. And it's about many of us who can't remedy such hurt and who are frustrated by it.

It's about people sometimes ignoring other people in faraway places with strange sounding names.

It's about a presence, and a power, to whom we choose to go for help.

It's about time we woke up to what's going on around us.

It's about time we recognized the skills we have at our fingertips, necessary for healing, for calming, for building, and for rebuilding.

It's about minds that can sort out good intentions from difficult attempts.

It's about people who want to do what is right and often end up satisfying their own appetites, and it's about guilt feelings for doing just that.

It's about humans being inhuman to each other.

It's about the same humans being dissatisfied with what has been, and trying now to make changes, to make a difference.

It's about God, trying to get through to us, and about us, being very trying, and sometimes, sometimes, catching glimpses of God in people, in actions and even in ourselves.

It's about time to begin.

Barbara Schmidt-Rinehart (Ph.D., The Ohio State University, Second Language Acquisition and Spanish Linguistics) is Professor of Foreign Languages at Ashland University. Her academic areas of research and publications focus on forms of address in Costa Rica, professional development abroad for US teachers of Spanish, and the homestay component of study abroad. She is the director of the “AU in Costa Rica” program and serves on the ACN Steering Committee.