Thinking About White Privilege "In the Moment" 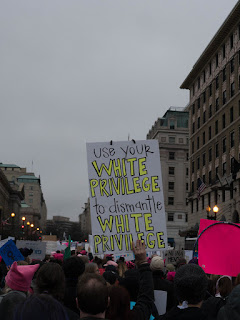 As Robin DiAngelo writes in White Fragility, if you talk about the “good old days,” you are white. The old days have not been so good for others.
I have been thinking a lot about white privilege since the death of George Floyd and the continuing protests against systemic racism in this country. Thinking about white privilege is not an easy task for white people. For many, hearing someone utter the term “white privilege” touches off such emotional resistance that nothing else said in that context can be heard. It is appropriate to start with a definition. Simply put, our society functions in a way that has allowed most of us white people to move through our daily lives quite nicely without thinking about race, while the institutional patterns of our society operate to the disadvantage of people of color. When whites do think about race, we intentionally or unintentionally hold ourselves as the standard by which other races are measured and usually fall short, except for exotic realms such as music, food, and presumed athleticism or sexual prowess.
White people have been living in the cozy milieu of white privilege all our lives, and as my daughter put it (quoting from some source), “Fish do not feel the water.” Another way to characterize our comfort with the only system we white people know is Tim Wise’s statement, “We are born to belonging” (White Like Me). When I walk into a shop, I never give a thought as to whether I am welcome or viewed with suspicion. Whenever I was interviewed for a job, it was always by a person of my own race. When I was stopped by a police officer, I was treated with the utmost courtesy. I could go for days, months, and years and never think about how my race affected my relationships and my life chances.
Having white privilege pointed out to white people typically brings a defensive response, usually something like,
1. “Anyone can make it in America if they work hard.”

2. “There are bad actors and sometimes a bad break, but there is no system of discrimination.”

3. “I did not create this system and am not responsible for it.”

4. “It is too widespread. I personally try not to take advantage, but I can’t do anything about it.”

5. “It may have been true in the past, but it has been remedied by civil rights legislation like Affirmative Action that tips the balance the other way now.”

Defensiveness and discomfort are understandable. Those of us who feel we personally are accepting, inclusive, and fair-minded do not like to face the fact that we have benefited from a system that gave us advantages by holding others down. Simply put, discussing race and privilege makes us feel we might not be as good and decent as we thought we were.

Adults attending a recent Trump rally with their children said they told the children that they do not see color, color does not matter, so the protesters are just troublemakers who do not like the president and THEY are the racists for making a big deal of color. Interesting, that idea of not seeing color. Many liberal white people say too: We are colorblind. Race makes no difference to us. However, we do see color—all of us do. We shut our eyes to the consequences of color, says Tim Wise, and that is far different and more sinister than not seeing color.

Is there a fear that giving up privilege and advantage will mean something will be taken away from whites? Our own personal privileged position in society may be a matter of luck (being born with white skin), but is it not scary and unfair to have to give it up? What exactly would we be giving up if all people were truly equal? Economists and other social observers tell us we would have a stronger economy and society if we had greater equality. Eugene Robinson, syndicated columnist, wrote, “What makes this moment of upheaval and protest different is that so many white Americans see how racism is a ball and chain that holds all of us back — and see what a braver, fairer, stronger nation we can be if we confront our original sin with honesty and determination” (appeared in Ashland Times-Gazette 7/1/20).

That sounds optimistic! I need to look into this a little more. I will let readers know what I find.

Dorothy Stratton is Professor Emerita of Social Work, having taught for 28 years at Ashland University. She is one of the founders of the Ashland Center for Nonviolence.

Dorothy,
I enjoyed this post. As part of the dominant culture, I am glad that current events are making it nearly impossible to ignore systemic dominant culture privilege. I am hopefully that this bright shining new lens will help more folks in the dominant culture to "see the light", so to speak. I had a charged, but respectful conversation with my 78 year old mother earlier this month. I don't think we would ever of had this conversation under different circumstances. Thanks for your insight.