Glitter in the Dirt

Gathering around the sweet and warm-hearted Israeli woman, the group of 41 adventurous Ashlanders chose their playground seats. Swings, slides, stumps, and low brick walls supported our tired bodies as we sat in the heat to listen to the tragic story of modern Israel. 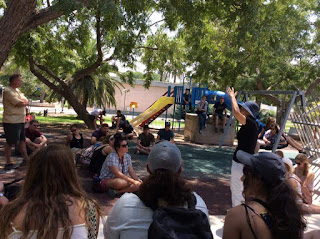 When we arrived, our tour guide Efrat pointed to the various small concrete buildings scattered around the community. “When you get off this bus,” she explained, “if you hear a siren, you have 10 to 15 seconds to get into one of those buildings.” A few of us giggled and through side glances. She can’t be serious. “You are two and a half miles from Gaza, and that’s how long it would take a rocket to get here.” We shut up.

We were in a region near Sederot, the “bomb shelter capital of the world.” Twenty years from now, I will probably not remember her name, but I will remember what she told us, and I will remember the moment the first tears fell from my eyes in the Holy Land. Nestled in this region of the Negev Desert is a kibbutz in Southern Israel, only a few miles from the border of the Gaza strip. As she reminisced about the horrors of war, and the day she had to pull her son out of bed and into a bomb shelter where they sat on the cold, hard concrete for 36 hours straight, I couldn’t help but notice the details of the scene I was in. 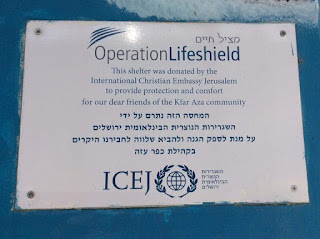 It was a beautiful day--hot and sunny without a cloud in the sky, as were most of the days we spent in Israel. I was sitting on a short, yellow, concrete wall between a powder blue building and a red and yellow column supporting its external frame. My classmates were scattered about the playground, beads of sweat glistening on the sides of their faces, their eyes locked on our speaker. Behind her was a concrete structure, probably about three meters tall. There were chalk drawings on the outside, rainbow stick figures holding hands. I could see small scratches and divots in the outside walls. The speaker passed around a small box the size on my palm. Within it were pieces of shrapnel that had been collected from the ground and the sides of her home. Thirty-six hours is a long time to hold your son on the ground without food or a blanket, sirens and gunfire and mortars exploding in the symphony of war outside. I cannot imagine.

I looked at the building next to me and ran my fingers over the unpainted lumps of plaster meant to cover up the shrapnel holes. “That’s the infant care center,” she told us. The building was lifted off of the ground, the walls reinforced with additional layers of steel and concrete, the roof reinforced the same, the additional weight held by the pillar on which I was leaning, and the windows were made bullet proof and were only small gaps on the tops of the walls. The infant care center. On a daily basis, children from ages 4 months to 4 years lived and learned and played in that building which had shrapnel in its walls.

I looked at the ground, the barren garden of dirt at my feet, in an attempt to desensitize myself from where I was. The dirt was shining. There was glitter scattered all over the ground, perhaps from an art project. Mixed with the glitter were a battery, a small lollipop stick, a wad of gum, and shiny fragments of metal. 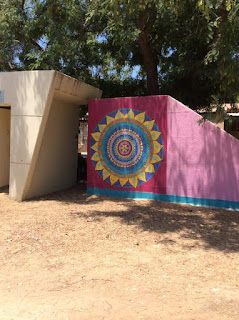 Seventy-five percent of children in this region are diagnosed with PTSD or another anxiety disorder before they turn 18.

There is a downloadable app for iPhone users (the English version has not been released for Android) in which a siren goes off whenever it would go off in the selected region of Israel. I downloaded it, and I use it as a prayer reminder. We should not stick our toes in the dirt and stare at the ground to desensitize ourselves. We need to listen for the sirens and smell the smoke being carried by the wind. In Ashland, Ohio, we do not know what this kind of fear is.

Emily Wirtz is a senior at Ashland University and a Peace Scholar with the Ashland Center for Nonviolence.