Recently, during the final weekend of January, amidst the chaos and costume of Ohayocon, members Ashland Women’s Chorus had the opportunity to travel to the Ohio State University to participate in the CONCEPT: Freedom Choral Festival. To raise awareness and funds for human trafficking and its prevention, OSU hosted the choral festival over a three-day period, consisting of a screening of Very Young Girls, a Women’s Glee club performance, featured speakers, a photography exhibit, “Unchained” fashion show, and CONCEPT: Freedom.

Kristina MacMullen, who also contributed to many other aspects of the program, was centrally the director of the CONCEPT: Freedom Chorus group, putting together a collection of three pieces, sung by multiple groups who had never before sung together in the span of a three-hour morning rehearsal. The pieces, “Untraveled Worlds,” “Will There Really Be a Morning?,” and “Will the Circle Be Unbroken?” were all incredibly moving, their subject matter consisting of breaking through bonds and adversity—the overall message of the program.

During our rehearsals, MacMullen was able not only to direct a catch-all choir to sing well (as well as a catch-all choir with minimal prep. time can sing) but to direct us to sing with passion and a story. “In this life is value,” value that allows victims to have the power to overcome childhood vulnerability and brokenness. The chorus wasn’t about the music—that much was clear—it was about channeling a story and invoking emotion and compassion and understanding. 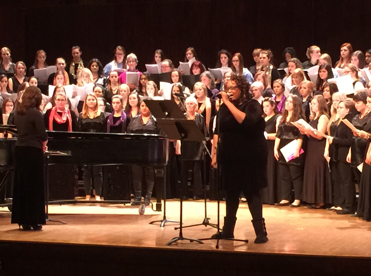 After our concert, the Unchained fashion show, designed by Project Runway’s Korto Momolu, commenced. Emily Dunlap, OSU alum, introduced the featured speaker Honorable Judge Paul Herbert, with whom she had worked as a human trafficking victim lawyer. Prior to breaking down the basics of the fashion show, he explained the 2009 installment of a restorative justice program, CATCH Court, for victims caught for commercial sex crimes. Dunlap and Herbert have helped to establish and restore the lives of an incredible amount of victims wrapped in the stigmatic clothes of criminals—which is essentially what the fashion show aimed to portray. Each model and her outfit, down to her facial expression, represented a different phase in a victim’s life. Different colors such as golds and yellows, represented as well the different stages, in this case, the woman as a valuable treasure, full of strength through overcoming. Oranges and blacks, on the other hand represented prison suits and broken darkness. The show’s narrator, who described each stage of life, abuse, and triumph as the models strode across the catwalk, reflected on MacMullen’s earlier message: “This life has value. This life has worth.” All the while, soft music and a bold beating heart played in the background. The show concluded with a word from its cofounder, Stephanie Cafani, who explained that all funds raised by the program went towards Survivor’s Ink—“She’s worth it.”

The weekend was an incredible experience that touched hundreds of lives and funded hundreds more. These organizations are also involved in fund-raising and awareness of human trafficking:

“Rescue is now. Rescue is us. Rescue is you. Now that you know, what will you do?”