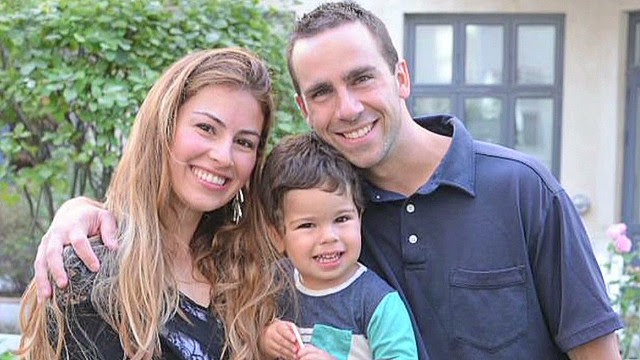 Just before Christmas, I read in the Guardian the surprising story of Anita Smith. She is the widow of Ronnie Smith, the American teacher in Benghazi shot down in the street by Islamic militants. The photograph accompanying the article shows an attractive young couple and their child in Austin, Texas: a scene utterly removed from the people and streets of Benghazi. The reason Anita  made headline news around the world is that she claimed in a CNN interview that “I don’t want any revenge --I want them to know that I do love them and I forgive them.” In her interview she explained why Ronnie and his family went to Benghazi, “He wanted to shine the light and the love of Jesus to the Libyan people . . . it was just about the love and forgiveness that we know from God.”
Anita acknowledged that her response to Ronnie's violent murder seemed unlikely: “It may sound crazy,” she told Anderson Cooper, “but it is God’s Spirit putting this inside of me.” The Spirit had led her to write a letter. “I want all of you--all of the people of Libya--to know I am praying for the peace and prosperity of Libya. May Ronnie's blood, shed on Libyan soil, encourage peace and reconciliation between the Libyan people and God.” When Cooper asked Anita how she would explain Ronnie’s death to their son Hosea, she said she will tell him, “There is no greater thing to live your life for than for Jesus.”My initial reaction was one of dismissal: how can her announcement have any grounding in reality? It seemed like a weird and inappropriate response; she is just saying what she thinks she has to say; she is falling back on religious platitudes. Does she even appreciate that these people might try and kill her too? How irrational, how naïve, how foolish.
I confess that my prejudices and presuppositions lay somewhere behind my incredulity.  I am used to hearing such things from Mennonites and Quakers, but it is not what I expect from a white evangelical from a large multi-campus, non-denominational church in Austin, Texas.
Analyzing my reaction, I realized there was more at work than my own prejudices. I realized that for me, the irrationality/naïveté/foolishness of loving your enemies only hit home when someone with enemies actually said they love them. I suspect this is true for others. After all, most of us play with the notion of loving and forgiving enemies far from the context of actually having to deal with enemies. I usually file this commandment away under the category How To Deal With Annoying People not under How to Respond to Someone Who Wants to Kill Me.
This Martin Luther King Day I would like to suggest that we need to revisit the well worn stories of Martin Luther King Jr. and the civil rights movement and ask ourselves why we don’t react to them with the same surprise and incredulity.

Looking at a photograph of the King family--Martin, Coretta and baby Yolanda--taken on the steps of Dexter Avenue Baptist Church in 1956, it is easy to make some comparisons between the photograph of the Smiths. In both photographs we see young, attractive, highly educated couples with their first child -- they all seem to have promising futures laid out ahead of them. But we know too much. We know there is a grimmer comparison to be made: both men will be killed by an assassin's bullet; both women will be made widows; both children will be made orphans; both couples have deadly enemies.
Another thing connects the photographs and the stories of these two families: a commitment to the command of Jesus to “love your enemies.” When King took to his pulpit at Dexter Avenue Baptist Church one Sunday in 1957 to preach a sermon on “Loving Your Enemies”, he said:
“Jesus was very serious when he gave this command; he wasn’t playing. He realized that it’s hard to love your enemies. He realized that it’s difficult to love those persons who seek to defeat you, those persons who say evil things about you. He realized that it was painfully hard, pressingly hard. But he wasn’t playing.”
King said this knowing very well that white men wanted to kill him. Less than two years earlier, his enemies--those who sought to defeat him--detonated a bomb at his house while his wife and infant daughter were inside. King didn’t move house, he did not lower his public profile, he did not arm himself to defend his family; instead, he continued as a leader in the growing movement. He was aware that this placed his own life and the lives of his growing family at risk.
Why did he make this foolish--perhaps selfish--decision?
The answer is that he believed Jesus was not playing when he said that his disciples should love their enemies. It was fundamental to King’s understanding of what it meant to be Christian and being Christian was at the heart of his call to the African American community to engage in nonviolent direct action.
This Christian conviction is present at the genesis of the civil rights movement. In his speech at the first mass meeting of the Montgomery Bus Boycott, King laid out why he was calling for nonviolence:
“I want to say, that we are not here advocating violence. We have never done that. I want it to be known throughout Montgomery and throughout this nation that we are Christian people.”
This call for a loving nonviolence as a Christian response to one's enemies is not sensible. It is not pragmatic. It does not ensure success for your cause. As history proves, it is quite likely to get you killed.
Why did Martin Luther King Jr. risk so much? It was not simply out of obedience to a command. It was out of a hope that is greater than death. He tried to explain this in his sermon to his congregation at Dexter Avenue Baptist Church:
“So this morning, as I look into your eyes, and into the eyes of all of my brothers in Alabama and all over America and over the world, I say to you, "I love you. I would rather die than hate you." And I’m foolish enough to believe that through the power of this love somewhere, men of the most recalcitrant bent will be transformed. And then we will be in God’s kingdom.”
So this Martin Luther King day, as I look at the photographs of these two families, their stories challenge me to appreciate the extraordinary reckless irresponsibility and death defying hope involved in loving enemies.
Posted by Ashland Center for Nonviolence at 1/17/2014