Pete Seeger, Selma, and Kenosha: Thoughts on Nonviolence and our Neighbors in Troubled Times 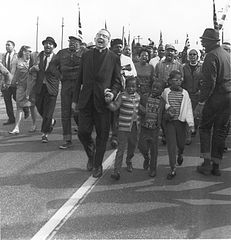 “I believe that in the period of history we are entering, it is going to be very difficult to love a large portion of the human race living here in the USA.”  -- Pete Seeger, June  6, 1965

I have spent the strange and terrible summer of 2020 alternately researching the life and work of songleader and folklorist Pete Seeger and standing with my Black Lives Matter sign on the corner of Main and Claremont. Seeger, the banjo picker and lifelong activist, has had a lot to say to me as trucks roar by and voices yell at the small band of Ashland’s persistent witnesses.

Around sixty days into the demonstrations, a nice old gentleman pulled up at the light, rolled down his window. “Thank you for not being like those violent protesters,” he said. He had obviously been watching the news filled with the late-night stand-offs in Portland: the tear gas, riot gear, umbrellas, fire and broken glass. He had also been listening to the political rhetoric designed to incite fear rather than offer insights to calm and heal.  But he had observed the motley collection of local people standing downtown and we didn’t match that reality: we hadn’t smashed, burned or looted anything.

His compliment struck us as absurd.

We are, indeed, a nonviolent protest but, honestly, what other option would we even have?  Certainly there are some of us who embrace Jesus’ ethic of loving enemies and refusing to strike back but others find that kind of talk naive and irritating. What unites us is our anger at the terrible life-destroying statistically undeniable bias in our country’s justice system. We have been heartened by the honks of support and look of joy and surprise on people’s faces as they drive past. We have also at times been shocked by some of the responses from our fellow Ashlanders, particularly when the screamed racist invective has been hurled at children. We all at times wonder if there is any purpose to what we are doing. One middle aged man on a Harley shook his head, “Jesus Christ! Give it up already.”

The week of the news from Kenosha followed by images of the counter-protest convoy of trucks flying “Trump 2020” and “Blue Lives Matter” flags pouring into Portland seemed very familiar to us. We see those same trucks every day--we jokingly call them the Ku Trucks Klan. But these are our neighbors who think we are terrorists and yell “All Lives Matter, dumbass!” at us as they pass. How on earth are our divided communities going to move forward? How much worse is this going to get?

In March, 1965, Pete Seeger and his wife Toshi walked alongside John Lewis on the march from Selma to Montgomery. Lewis was one of the great American apostles of nonviolence; for him nonviolence was a way of life. Seeger, took a more pragmatic approach. He, perhaps like most of us, was impressed and inspired by the nonviolence of the Student Nonviolent Coordinating Committee (SNNC) and the Southern Christian Leadership Conference (SCLC); however, he couldn’t completely give up the idea that a conflict might arise where violence would be the last resort needed to stop a terrible enemy.

Pete Seeger was excited to hear all the singing going on around him. A group of teenage girls walked behind the couple. For mile after mile they sang. They sang church songs and school songs and freedom songs hoisting up the songs like sails to catch the wind. Some filled and went on for chorus after chorus with voices up and down the line joining in. Others just flapped against the mast to be lowered after only a couple of verses. Seeger jotted down the words marveling at the way that the girls were singing new words to old songs and adding their own verses--seemingly making some of them up on the spot.

One of the new verses surprised the veteran folk singer.

I love Governor Wallace in my heart . . .

For the communist Pete Seeger, this joyful moment of singing brought alive a piece of Christian teaching, “If any one says, ‘I love God,’ and hates his brother, he is a liar; for he who does not love his brother whom he has seen, cannot love God whom he has not seen” (1 John 4:20 RSV). It played over in his mind in the succeeding weeks. In June he gave the Baccalaureate address at a college. Telling the students about the march and the girls singing he said, “I’d like to commend this spirit to you, because I believe that in the period of history we are entering, it is going to be very difficult to love a large portion of the human race living here in the USA.”

Seeger was anticipating the escalating conflict and political polarization around the war in Vietnam and poverty at home: divisions that over the next few years brought riots to cities and death to college campuses and mass protests to the capital. But those words spoken 55 years ago never seemed more relevant than they do to me today.

They are honest words.

Today, many Americans find it increasingly hard, if not impossible, to understand the priorities and political commitments of their fellow Americans. Looking ahead, it will be hard for us to love each other after all that has been going on.

Pete Seeger, who was instrumental in bringing the song Kumbaya to the folk revival and the civil rights movement, did not offer those students what we might now call a Kumbaya moment at their graduation; instead, he issued a wake up call: “I believe the best thing you can do is make up your mind that you will be living in an unpleasant world for much of your lives.” But then drawing on his experience on Alabama’s Highway 80, he said, “If we are in for a struggle to keep our country from falling into bad ways, don’t think it need be a joyless struggle. Far from it. As Jesus urged his disciples, ‘Be of Good Cheer.’”

For me, these words have been incredibly helpful. I am not going to pretend (as we hear some say) that our problems will magically disappear after the elections in November. Whoever wins, we will be stuck for decades with the damage already done. These carefully nurtured divisions will continue to damage and destroy lives.

How do we proceed into that future? I am with Pete Seeger and the Apostle John: the key question is how on earth are we to love our neighbors that we see everyday?

I appreciate Seeger’s honesty, loving some people is going to be a struggle.

Pete Seeger was not a Christian; his mother in-law used to jokingly chide him for his “diabolical materialism.” But maybe he understood Jesus’s words in John’s gospel better than many of us who profess to be his disciples. The words of Jesus that Seeger quoted to the students all those years ago come from John’s gospel: “In the world you have tribulation; but be of good cheer, I have overcome the world” (John 16:33).

I take heart today from the joy Seeger glimpsed on the march from Selma to Montgomery: he witnessed a nonviolent movement building and celebrating community and singing together. Perhaps only when the struggle is nonviolent can there be the hope that it will not be a joyless struggle.

--
Peter Slade is a Professor in the Religion Department at Ashland University.

Excellent commentary, Peter. Just what we need to hear. Thank you.