When Did I Become A Latina Caricature?

I have always been very proud to be Latina. To be Puerto Rican has always seemed liked the highest honor for me. However, I’d never truly been aware of my race, that is, until I came to the states. Between jokes about how I probably live and participate in a drug cartel to people questioning my lack of an accent I suddenly found myself aware of my race and becoming a caricature of what it means to be Hispanic in the eyes of some Americans. 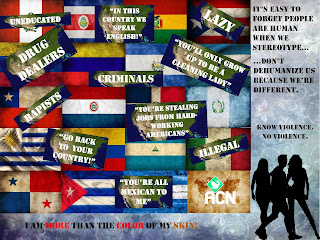 It seems as if everyone wants me to speak with an accent or imitate an American trying to speak Spanish. People clamor for me to say “something in Spanish,” they wonder if I like spicy foods, if I dance. If I’m a little too loud or sassy “It must be that Puerto Rican blood.” Every time the topic of drugs comes up it seems as if all eyes are on me, because as the Hispanic I must know all about it. They seem to think my country is filled with famine, poverty and sickness. It’s a shock to some that we are, indeed, part of the 21st Century.

In a much more generic sense I think as Hispanics/Latinos we all experience the same generalized stereotypes. While some may claim that we’re oversensitive and that they’re just joking, they don’t truly realize the effect their generalized assumptions and micoagressive jokes truly have on us.

For years there’s been an assumption that as Latinos we’re uneducated. While we could easily ignore this comment, this is a serious offense and puts pressure on some of us to achieve the highest academic standards. Personally, I find myself pushing myself extra hard to have the highest grades possible, to prove my intelligence and to show how I received a good education in my own country. This same “uneducated” assumption reflects on all the comments I receive about how I don’t have an accent and where I learned my English. Just like in the US, our teachers received academic preparation and excel in their fields. My educational background is not defined by stereotypes.

Then there are the assumptions of who is “legal” and who isn’t and the jokes about how all Hispanics are Mexican. Our offencs as a community does not come due to any ill regards toward Mexicans, our offense comes due to the fact that by grouping all Latinos into ONE group we are denied our identity. We are striped of our history, our dialect, our customs and cultures; our own nationality is washed away as we’re all denied years of hardships and successes that define who we are as people and as nations.

On the topic of “legal” vs. “illegal” I do not claim that anyone should be able to come to this country illegally, however, to assume that those who are “illegal” in this country are here with nefarious plans is cruel and demeaning. Unfortunately, some people lack the resources to come here legally but desperation and a need to take care of their families brings them here undocumented. It seems as if the hardships and struggles of having to leave a family behind in search of better opportunities and economic stability are erased by the lack of documents. My final point on this is the term “illegal.” Why not undocumented? Illegal carries with it connotations of immorality, criminal intentions and wrong doing; while I do not pretend to frame immigrants as perfectly lawful as a whole, I also cannot ignore the injustice the title of illegal brings upon good, hardworking people.

My final point rests on language. While I do understand that while working or socializing with other English-speaking US citizens it is expected and best to communicate in the English language, I find it jarring that some Americans take offense to the use of other languages in their country. What language I speak in the privacy of my own home, while speaking to my family or interacting with other Hispanic friends should not cause such discomfort.

Stereotypes dehumanize us by presenting us as mere caricatures of who we really are. It’s okay to ask questions, to want to learn, but to offend due to honest disinterest and ignorance is a form of violence. It is easy to assume that because there is no physical violence that no damage is done, but stereotypes hurt as well. They brand us and confine us to what is expected and leaves us to carry the burdens of having to break these stereotypes. To end violence we must first know violence – we must acknowledge that it is easy to forget we are human when we enforce stereotypes but if we take a stand against them, we will know violence and there will be no violence.


María Cardona is an intern with the Ashland Center for Nonviolence.