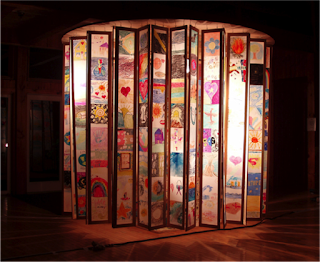 Visiting artist Traci Malloy's presentation on Oct. 8 continued with her work on collaborative art. After September 11th, a significant amount of young children were left without a parent, and many of them didn’t know why. How was a mother to tell her kindergartener that daddy was killed at work by a hijacked plane? It’s not an easy conversation to have, and it’s not an easy concept for a child to grasp. For this reason, America’s Camp was started.

She explains how difficult it was to see these kids, devastated and confused by a tragedy so far beyond their understanding, trying to cope. Her collaboration with these children was eye-opening, if hard on the heart. During the years of America’s Camp, she and the children created a quilt, postcards, a paper mache phoenix and a variety of drawings. One of her projects opened up to be an incredibly powerful piece of artwork, surprising even her.

In introducing this piece, she first delved into a bit of Greek mythology. Pandora’s Box is quite often a misinterpreted story. The first woman on earth was given a box by Zeus. Pandora opened the box, letting forth all of the evils and death of the world. Frantically closing it, Pandora unknowingly trapped hope inside. “Pandora’s Lantern” is based off of this story. Like a giant Chinese lantern, the panels of this piece of artwork fold in and out, containing the drawings of the kids of America’s Camp. Within the lantern is light, showing the hope these children have for their own futures, along with a recording of the children’s voices, naming their parents and their hopes. The hope left in Pandora’s Box is exposed and radiating in these kids.

Traci reflected that the drawings the campers made for each project grew more and more vibrant and visually hopeful throughout the years and until America’s Camp was no longer—victims’ children were no longer children. Her artwork brought joy and life back into the hearts of tragedy. The children were no longer the children of victims, but the children of mothers and fathers. They were not labeled as victims of tragedy, but were identified as bearers of light and hope.

Every one of us has an identity. Every one of us also has an ethnicity, a race, a gender, a class, and a past. How we choose to identify ourselves may or may not be one of those categories. Unfortunately, all too often a stereotype arises from something that makes us who we are. Our race becomes our label, or our gender, sexuality, class, etc. and those labels become how we are identified—not how we identify ourselves. All too often a black man is perceived to have a gun in his pocket instead of a checkbook. A woman dressed in old sweats is perceived to have a food stamps card instead of a teaching license. A man on the streets is seen as a lazy addict instead of a man with a Ph.D. and a family to feed.

Emily Wirtz is an intern and Peace Scholar with the Ashland Center for Nonviolence.