Every one of us has an identity. Every one of us also has an ethnicity, a race, a gender, a class, and a past. How we choose to identify ourselves may or may not be one of those categories. Unfortunately, all too often a stereotype arises from something that makes us who we are. Our race becomes our label, or our gender, sexuality, class, etc. and those labels become how we are identified—not how we identify ourselves. All too often a black man is perceived to have a gun in his pocket instead of a checkbook. A woman dressed in old sweats is perceived to have a food stamps card instead of a teaching license. A man on the streets is seen as a lazy addict instead of a man with a Ph.D. and a family to feed.


On October 8, visiting artist Traci Molloy spoke in the Ridenour lecture hall—and she filled the house. As her presentation went on, it was clear that the information she was sharing with us was a powerful message she shared through her art. She considers herself as much a social activist as an artist, and I would have to agree. One of the first pieces she shared was a series entitled “Kids that Kill Kids.” 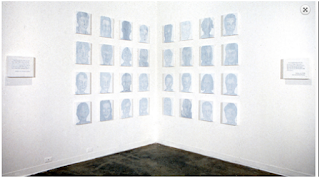 From this series came a variety of portraits and overlapping text. One piece that stood out to me in particular was one named “Missed/Dismissed.” Its display contains a series of mugshot-style portraits of both victims and perpetrators on death row. Each portrait is equally whitewashed, and the text plaques on either side are statements made by the mother of a murdered child and by the mother of a child who committed murder. The grief is the same. It is the same humanity captured within the art and the words it speaks.

If we were to look at a portrait of a sad 17-year-old, wouldn’t our immediate thought be of a child? But, if we were to look at the mug shot of a 17-year-old on death row, knowing that he had murdered a child, would we still think of him as a child? Would we have the heart to forgive him or would we condemn him? These are the exact questions that Traci’s art seeks to make us ponder. They aren’t easy questions to answer; how much worse it must be for their mothers! Perhaps this piece deals less with stereotypes and more with morality, but “murderer” and “victim” have become these children’s labels. Those are their identities—she seeks to challenge this. Nothing is black and white. Even the portraits have grey areas.

Emily Wirtz is an ACN Peace Scholar and Intern.