Images from Maria Cardona's graphic art series "Know Violence, No Violence" are currently circulating on campus plasma screens. We wanted to hear about what inspired Maria, an ACN intern, to address the many ways we encounter violence, including issues of race and stereotyping, using graphic media.

ACN: What inspired you to create the "Know Violence. No Violence" series?


Maria Cardona: There are multiple factors that went into the creation of the Know Violence, No Violence series. The first was artist Traci Molloy's visit to Ashland in October. Her artwork really showed me the impact that images can have and how art can be used as a way to combat violence and ignorance.

Aside from Molloy's presentation, the idea of microagressions and racism played a huge role in the series. I wanted to represent the harsh stereotypes people of various races have to deal with on a daily basis and how these stereotypes dehumanize people into caricatures of who they really are. Sometimes stereotypes and generalizations make us miss the opportunity to really get to know people for who they are and not who they are "supposed" to be. As a minority, it is such a struggle to debunk these stereotypes, because sometimes we get so caught up in not being a stereotype that we can't really show every part of who we are. 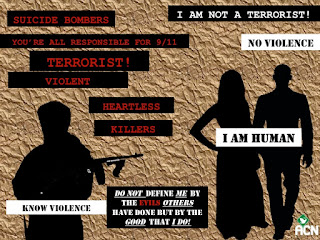 Other than race, mental violence also helped me to create this series and to focus on the idea that violence isn't always physical or perpetrated by someone else. Mental health issues, especially anxiety and depression, inspired me to show the inner war many of us fight daily with our own selves. We don't think of these attacks on ourselves as violence but the long-lasting effects they leave on us and our self-esteem are proof that it is a type of violence--and that it is important for us to recognize it as this in order to combat it.

The final element that inspired me to create the series was the massive issue of rape. After reading the play "I Dream Before I Take the Stand" by Arlene Hutton, I was frustrated by how widespread victim-blaming is in this play and how ten years after this play was written our society seems to continue to hold the same beliefs. Reading this amazing play was what really inspired me to do something against victim-blaming and show that instead of silencing victims, we need to encourage them to seek help and justice. 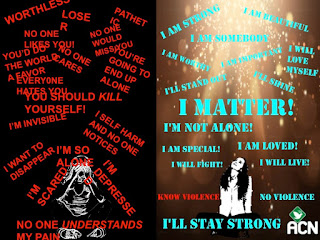 ACN: One of your images addresses Islamophobia. What do you hope viewers of this piece will come away with?


MC: After viewing the piece on Islamophobia, I hope that the viewers can realize that it is incredibly harmful to generalize. I hope that viewers start to see people as people who have the right to define themselves through their own actions and not be thrown into a category where they are misrepresented by a select group. While the fear that terrorist--most recently ISIS--has planted in people is very much reasonable and understandable, Muslims end up being victims of Islamophobes who, blinded by fear, assume they are all violent and have nefarious intentions. The most important message here is that a) yes, what terrorists do is a horrible form of violence, but marginalizing all practitioners of Islam and harrassing them is also a cruel and undeserved form of violence; and b) we are all humans who feel and who hurt and Islamophobic remarks are harmful and the generalization dehumanizes Muslims into monsters which they aren't. 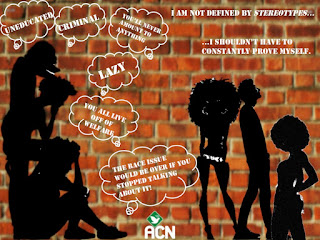 ACN: What can college students do to help break down the barriers between people and address these sources of conflict?


MC: As college students, I think it is important for us to talk about these issues openly but respectfully. Many times under the guise of freedom of speech we end up arguing instead of debating and our opinions become hurtful remarks. It is important for us to have an honest conversation that is still respectful. While we all have freedom of speech let us not abuse this right and use it to express our opinions in disrespectful manners. Instead, let's find a way to express our opinions without attacking and insulting each other. Aside from having this open conversation, let's just be kind to one another and be much more welcoming with international students. They come from far away looking for a great experience so let's interact with them positively and really find a healthy way to coexist and support diversity.

Maria Cardona is an intern with the Ashland Center for Nonviolence focusing on issues of race and violence.