Last night (Dec 8) about fifty people—students and community members—gathered around the flag pole on the AU campus for a silent vigil remembering the victims of mass shootings. It was mostly silent. There was some chatting, some singing, and a little speaking, but it was a time of reflection on the shootings that are filing the newscasts and the headlines. 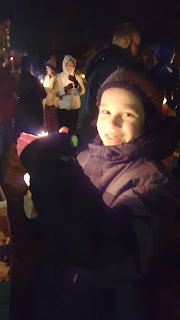 That lighting, relighting, and relighting of the candles is a powerful metaphor for community. We lit and relit each other's candles without thinking that in another moment our candle would need to be relit. We kept the community bright, not by building a single giant candle but by keeping all the candles lit. We held back the darkness because we each were holding candles and helping others keep their candles going.

We were a small group acting out, in a small way, the meaning of community. It is a model for all us—to light and relight each other's candles, while knowing that someone will relight ours if we need it.


John Stratton is a member of the steering committee and emeritus director of ACN.